The Yes Scotland campaign has unveiled its new design for the ballot paper to be used in 2014. 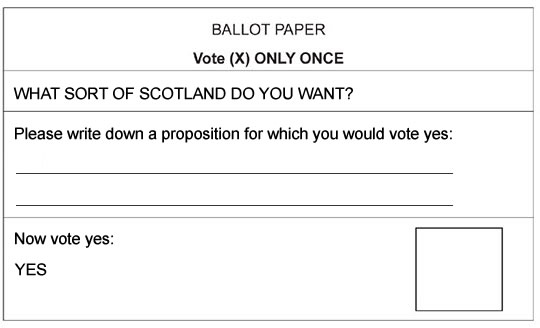 "The beauty of this new design", says campaign supremo Blair Jenkins "is that we can now truly be all things to all people. Until now we've had to tell progressives that an independent Scotland would be founded on social justice, while we told multinationals that we'd give them corporation tax cuts. And we were telling Labour folk that it will be a left-wing hegemony, while assuring those on the right that independence would see a resurgence in the comforting conservatism which many crave but currently feel unable to vote for."

"And of course we've been desperately trying to redefine the concept of 'independence' for Devo Max supporters to mean fiscal powers within a single monetary system, and the sharing of a head of state. Meanwhile we are telling our core fundamentalist supporters that we were still on the road to 'frreeedom' for which they have fought for so long. Frankly it was getting unsustainable, and something had to give."

Campaigners are hoping that by allowing everyone to pretend that independence will deliver their perfect vision of Scotland, they can cruise to victory in the September 2014 poll. Indeed they are so confident of the success of this new approach that the new design doesn't even have a No option. "If you can make up the thing you're voting for, why would anyone vote against it?" asks Jenkins. Why indeed.
at 20:12
Email ThisBlogThis!Share to TwitterShare to FacebookShare to Pinterest